Turbochargers use otherwise wasted exhaust energy that would go out the tailpipe to drive a turbine wheel connected via a shaft to a compressor wheel. The compressor wheel packs more air into the engine yielding the now familiar “turbo boost” to vehicle acceleration. This has allowed automakers to use smaller, more efficient engines helping to improve fuel efficiency and reduce carbon dioxide emissions without compromising performance.

Garrett’s E-Turbo keeps this basic concept but adds a small electric motor on the shaft between the two wheels, which allows two new things to happen.  First, the electric motor can spool up the turbo to provide boost immediately off idle, effectively eliminating the lag between the time a driver hits the accelerator and felt acceleration. Electrifying the turbocharger also removes the design constrants prioritizing turbine efficiency at low engine speeds to drive the compressor. The addition of electric power to compensate when air flow is low allows Garrett to use a larger turbo more appropriately matched to engine’s natural sweet spot of operation.

Second and most exciting to the future of hybridization across vehicle segments, the E-Turbo can electrically recuperate spent –and otherwise wasted–exhaust energy by using a small electric motor to generate electricity and recharge the hybrid battery.  This ability to be an onboard provider of electricity opens up options for auto makers in designing hybrid powertrains.

Garrett has been collaborating with a global auto maker and other industry suppliers to demonstrate the capabilities of this new technology. Presenting at a conference in Germany earlier this year, Garrett engineers spoke to several testing processes that resulted in the E-Turbo outperforming the smaller current production turbo at all speeds. Most impressive was at low engine speeds (1500 rpm) where target torque was reached in 1 second vs 4.5 seconds in the current production model.

Overall, results indicated the E-Turbo has the potential to improve basic engine performance in a manner consistent with future legislation requirements for fuel economy and emissions. In Garrett’s case study, rated power increased 16%, torque increased 10.5%, and the time to go from 60 to 100 km/h improved from 11 sec to 8.8 sec (-25%).

Garrett’s software redefines conventional ECM and mechanical turbo interaction by creating a new control subsystem for the E-Turbo. The ECM partner prepares the integration environment – including the interface and memory allocation – allowing Garrett engineers to apply control code into the ECM and enable the customer to calibrate the boost strategy independently.

Energy management is one of the key building blocks developed by Garrett on a technology pathway leading to predictive energy management and powertrain optimization as well as vehicle health management. Garrett’s proven world-class expertise in handling multivariable controls addresses the added complexity of introducing electrical energy into the vehicle and creating a more complex system with multiple objectives. 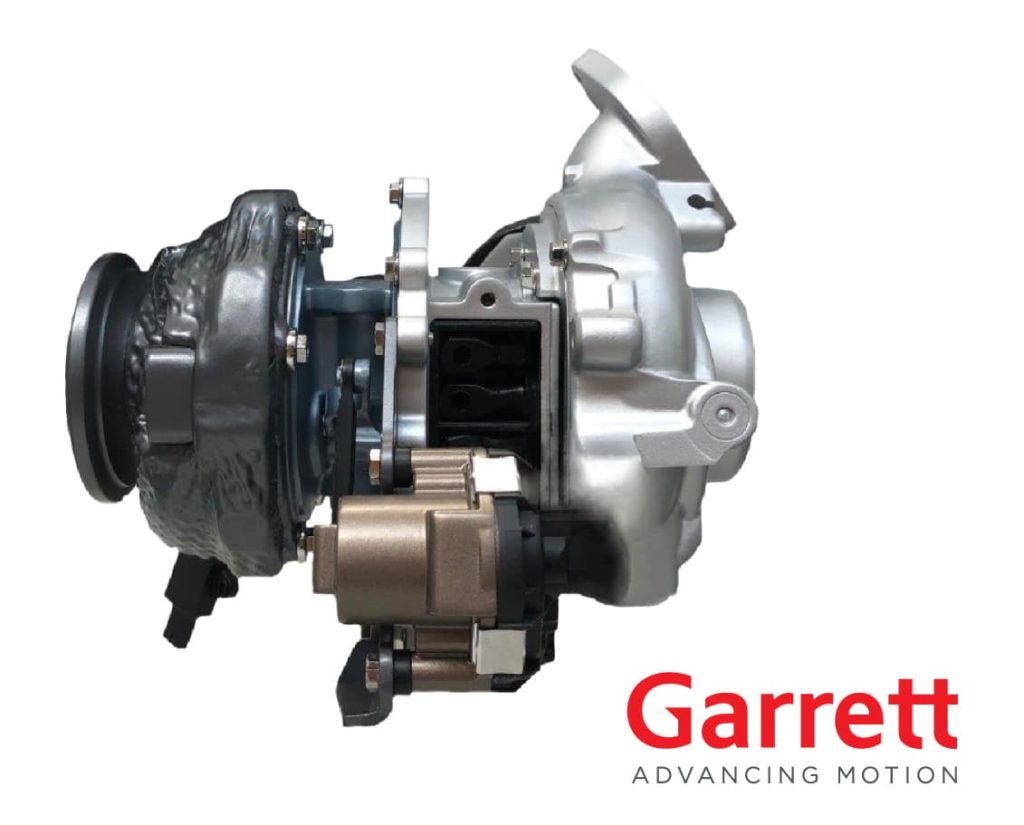