With over 50 million units in the field, Garrett Variable Geometry Turbo (VNT™) is a key variable geometry turbo technology for auto manufacturers as they seek to enhance light vehicle driveability, improve fuel efficiency and reduce emissions.

Engine range
Variable Geometry Turbo (VNT) technology, in a mono-turbo set-up, is ideally suited for diesel engines from 0.9L to 3.0L. While the majority of VNT applications are in the 1.4L to 2.0L range, the architecture is also heavily specified in the premium 3.0L V6 diesel segment.

Key Features
In a VNT turbo, the exhaust flow through the turbine wheel is controlled by a row of vanes that move to match the exact boost requirements of the engine. At low engine speed, the variable nozzle turbine vanes close to restrict the exhaust air flow through the turbine, thereby increasing turbine power and boost pressure. At higher engine speeds, the moveable vanes open to maximize the exhaust gas flow, thereby avoiding turbo over-speed and maintaining the boost pressure required by the engine.

The current Garrett Variable Geometry (VNT) turbos are upgraded versions of the third generation VNT launched in 2004. The key advance was the ground-breaking way that the variable mechanisms were attached onto the bearing housing through an elastic shroud. This new platform delivered many innovations – a new cartridge design, new cambered vanes, a new generation turbine wheel, improved aerodynamics and better controllability.

VNT technology is also a key enabler of engine downsizing, an industry-wide trend to create smaller, more fuel-efficient and lower-emitting powertrains that match or exceed the performance of their larger counterparts and enhanced braking capability.

Evolution and Future Trends
Although launched 20 years ago on the 1.9L Fiat Croma, it was in 1995 that VNT, with a new vane design and improved aerodynamics, really came of age when matched to VW-Audi’s 1.9-liter direct injection diesel engine. Second generation VNT, launched three years later, offered greater controllability through new aerodynamics and electric actuation. Then came the 3rd Generation, launched on the BMW One Series with a new cartridge design, cambered vanes, new turbine wheel and improved aerodynamics… all combining to deliver 130 percent of Generation 2 boost at 90 percent of back pressure.

With its versatility in range and ever-improving capabilities, VNT will remain the leading turbo technology for diesel engines for the foreseeable future. Garrett engineers are working on scale reduction to fit ever-smaller engines as automakers embrace the downsizing agenda, while at the same time it’s now also a key component in a number of complex two-stage turbocharging systems to deliver superior performance and great fuel efficiency. It’s also increasingly linked to 3 or even 2-cylinder diesel power units. It’s clear that the technology has a great future ahead of it, particularly with ongoing advances in aerodynamics, bearing systems and materials science. 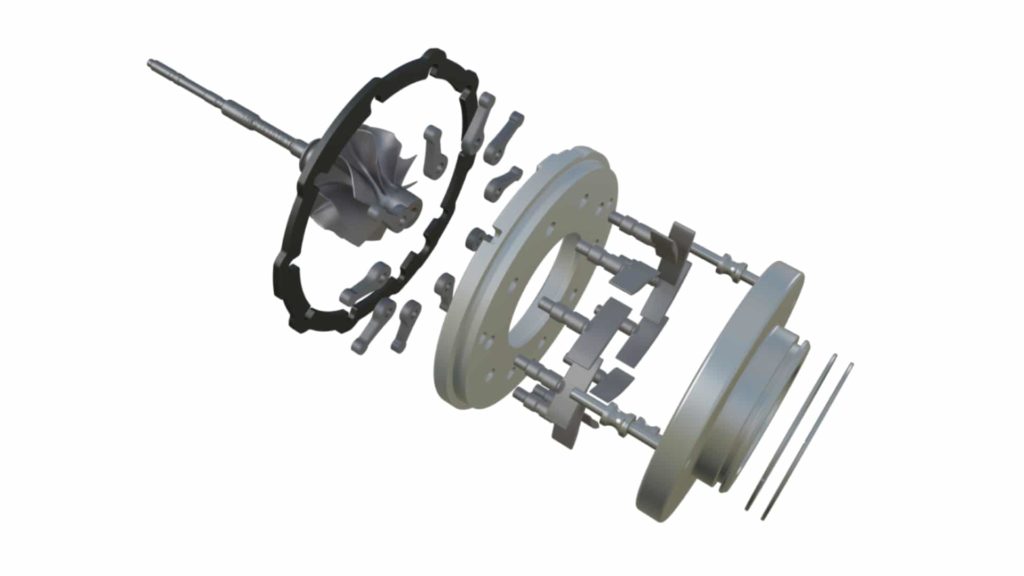