How “Greening the Grid” Makes Hydrogen Fuel Cells a Necessity

This is the next entry in a multi-part series from Garrett Motion addressing the role of hydrogen fuel cell technology in achieving evolving global goals for sustainable and environmentally friendly energy solutions.

In addition to this commentary, you can learn more about hydrogen fuel cell technology by downloading the full Garrett white paper. “Greening the grid” refers to the global shift from fossil fuels for electricity generation to non-carbon-based renewables, namely wind, solar and hydro-electrical production as well as geothermal. But while some consumers might look at new wind and solar electricity installations as novelties, many parts of the world have already shifted toward greener energy . . . and for very good, yet simple, reasons.

According to recent industry data, renewable energy accounted for more than 60 percent of new electricity generation worldwide in 2018(1), most of which was in Asia where demand is skyrocketing. But perhaps even more surprising is that worldwide, renewable energy now accounts for nearly one-third of all electricity production(2).

And while the world rushes headfirst into bringing even more renewable energy production online, these new sources of electricity to power homes and businesses pose new challenges to utility companies and others trying to manage the electrical loads on existing grids.

The Challenge is Intermittency

The world is used to burning coal or natural gas to ignite steam generators with the press of a button that, in turn, produces electricity for grids around the world. Utility companies understand how much electricity they’ll need locally and regionally and can increase or decrease electrical generation based on expected loads. And while hydro-electrical power is a near-constant source of energy to turn generators, the more common wind and solar sources rise and fall throughout the day with movement of the sun and changing weather patterns. This intermittency(3) means that not only there are times when electricity demand exceeds generation capacity, like late afternoon periods in especially hot climates when air conditioning usage spikes, but also times closer to mid-day when electricity production exceeds demands. This is an enormous challenge.

Unlike the average person’s household that may have many rechargeable, battery-powered electronics along with several packs of disposable batteries for devices like TV remotes or flashlights, large electrical grids have comparably little battery storage, which gets us to the question: What do we do with excess energy in these increasingly greener grids? Some people might envision enormous vaults of lithium-ion battery packs storing all of the excess energy, but this isn’t feasible for two reasons – the cost would be in the trillions and worse yet, these packs degrade over time(4).

These reasons alone make storing the energy in battery packs unfeasible anytime soon, but additionally, the carbon dioxide production from creating these packs would only add to atmospheric carbon emissions.

So, what does this have to do with hydrogen fuel cells?  In short, everything.

Hydrogen fuel cell technology is rapidly advancing: power is going up, costs are quickly coming down and the technology, while not as mature as that in battery-electric vehicles, is seeing a new surge in adoption in both commercial and passenger vehicles.

Today, much of the industrial hydrogen created globally happens via steam reformation of natural gas. Clearly, using a fossil fuel to create hydrogen doesn’t advance low-carbon or renewable energy goals. One way of storing the excess energy is a concept called “sun in a box” whereby solar panels heat molten salt storage facilities. This heat is then used on demand by a heat exchanger to create electricity. This technique has the advantage, in theory, of costing less than industrial scale lithium-ion batteries.

But electrolysis is a clean, albeit less efficient, way of creating renewable hydrogen from water.   Essentially, an electric charge is passed through water, which separates the water into hydrogen and oxygen. Hydrogen has a fundamental advantage over almost all other sources of energy – it’s the most abundant element in the world(5).

So as the green grid emerges, and these grids produce a surplus of electrical generation from uneven and intermittent renewable sources of electricity, the grid could incorporate electrolysis facilities that utilize excess electricity to create and store hydrogen.

We strongly believe that hydrogen fuel cells – more accurately the use of excess electricity from intermittent renewable energy sources to create hydrogen from water – represent an enormous opportunity to “store” this otherwise unusable energy as compressed hydrogen. In fact, this is no longer a pipedream – there are already several pilot programs in-place today(6) (7).

use, but produced in large enough quantities could be used to create more electricity (and heat and clean water, both of which are the only byproducts of fuel cell electrical generation) for applications like backup power generation at hospitals and the cooling of server farms for companies committed to 100 percent renewables.

For more information about how hydrogen fuel cells can more quickly usher in the era of low- and zero-emissions, please read Garrett’s white paper by clicking here. Hydrogen Fuel Cells vs. Battery Electrics: Why Fuel Cells are a Major Contender 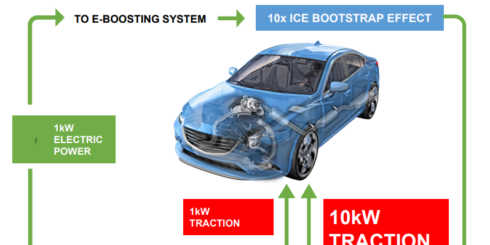 “Electrification” has become a great, big, giant buzzword in the automotive industry as the global pursuit of cleaner more efficient energy imprints itself upon the… 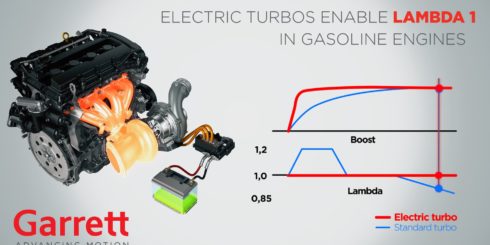 Electric Turbo innovation Between now and 2025, the auto industry worldwide will undergo an enormous transformation that will include 48-volt mild hybrids, high-voltage hybrids and…