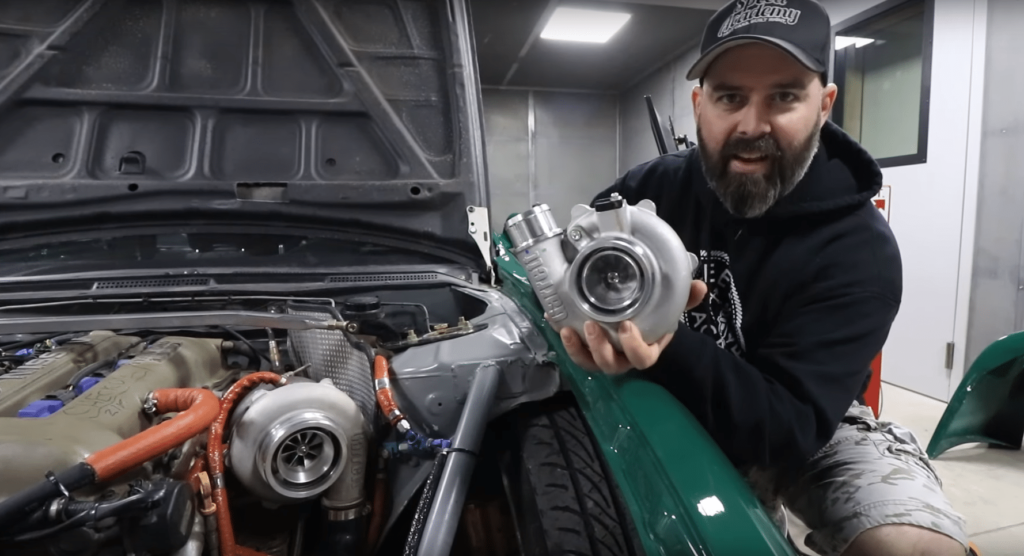 You don’t need huge power to have fun in a drift car. But you do need a setup that has enough low end torque to pull you through and out of the corners. One of the most popular platforms, if not the most popular platform for drift cars is the Nissan S13 (1989-1994) and S14 (1994-1998) chassis. Known for having a well balanced weight ratio, rear wheel drive, great looks, and the ever popular SR20DET 2.0L turbocharged inline 4 engine. The question that remains is how do you get that V8 power out of a 4 cylinder 2.0L engine? You upgrade the turbo of course! The guys at Speed Academy dyno tested two Garrett turbochargers on the same car back to back to see what the best turbo for the SR20DET is.

Just to be clear the test isn’t exactly apples to apples here when it comes to the turbo sizes. That wasn’t the point either. We wanted to show how two turbos rated for very similar engine displacement and horsepower ranges perform on the dyno on the same engine and car. The car, an S14 owned, hooned, and tuned by Sasha at Onpoint Dyno. By the end of the video you should have a better understanding of the trade-offs associated with changing turbos, the horsepower both turbos were capable of producing on a given engine, where it was made in the RPM range and how that could affect the driving experience.

You can see the difference in the compressor and turbine dimensions. With the two turbos being matched so close in horsepower and displacement range you can be certain of this: that the greater the mass of an object, the more inertia an object has. Inertia is the resistance to change in motion. This is why identifying your target power goals is so critical so you can select the best turbo for your needs. The turbine wheel is made from inconel, which is a very dense material so the larger the wheel the longer it takes to spool.

The objective was to move the power band earlier in the RPM range to provide more response without sacrificing top end. The solid green line is the G25-550 torque curve and the solid blue the G25-550 horsepower. G25-550 produces about 90 more torque way down low in the RPM range meaning the turbo is producing boost earlier. It hits peak torque around 3900 RPM compared to 4600 RPM with the GTX3071R Gen II, an improvement of 700 RPM which will be very noticeable on the track. The horsepower started to drop off at max RPM with the G25-550 most likely to a restriction in turbine flow where the GTX3071R maintained the peak power though 7100 RPM. Two great turbo options for two different driving experiences. Before the G Series turbos hit the market the options would have been GTX3071R or GTX2867R to try and reach the power goals. The G Series turbo chargers provide new and more efficient compressor and turbine aero combinations that improve boost response without sacrificing power. For more information on the G25-550 and GTX3071R Gen II click the links and please watch the video below and subscribe to the Speed Academy YouTube channel.