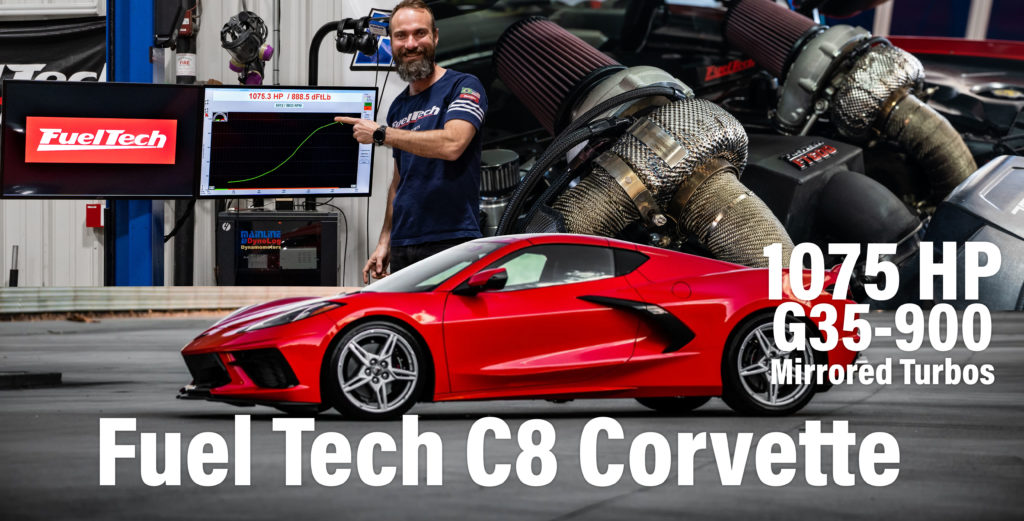 The FuelTech USA C8 Corvette development vehicle recently became the most powerful one of its kind by unleashing 1,075 whp from its twin turbocharged combination. FuelTech is known for pushing the boundaries of fuel management systems and offering many products that help keep turbochargers and other performance components operating at their potential. From drag racing to drifting, chances are you know someone using their products like Rob Dahm, or Mark Micke. This write up gives you some insight into what goes on behind the scenes at FuelTech’s USA headquarters with their in-house dyno and R&D facility. With the help of Garrett mirrored G35-900 turbochargers, this awesome C8 made 1075 horsepower at 21 lbs of boost.

The record-setting dyno performance has been a year in the making as FuelTech’s Corvette has garnered a significant amount of attention around the world, including various YouTube feature videos, and through FuelTech USA’s website and YouTube channel. The previous high horsepower benchmark belonged to Emilia Hartford and her turbo Corvette, which set it at 1,022 rwhp and with more companies, teams, and shops building C8 Corvettes, the competition will continue to raise the bar!

The new Dodson clutch upgrade—purchased from Cicio Performance—not only increases the clutch disc count, but it also uses better friction material, enabling the C8 Corvette to transmit more power to the tires. The clutch now has 8 small plates and 7 large ones, a step up from factory clutch that holds six and five, respectively. In the case of the FuelTech R&D vehicle, the company’s founder and lead innovator, Anderson Dick, was able to increase boost to 21 psi thanks to the better clutch setup; the net result is 1,075 whp and 888 lb-ft of torque at the hubs! Prior to the Dodson clutch upgrade the FuelTech Corvette could only get to 750 whp on the Mainline Hub Dyno and roughly 600 whp at the gearshifts, which comes at just 4 psi of boost. 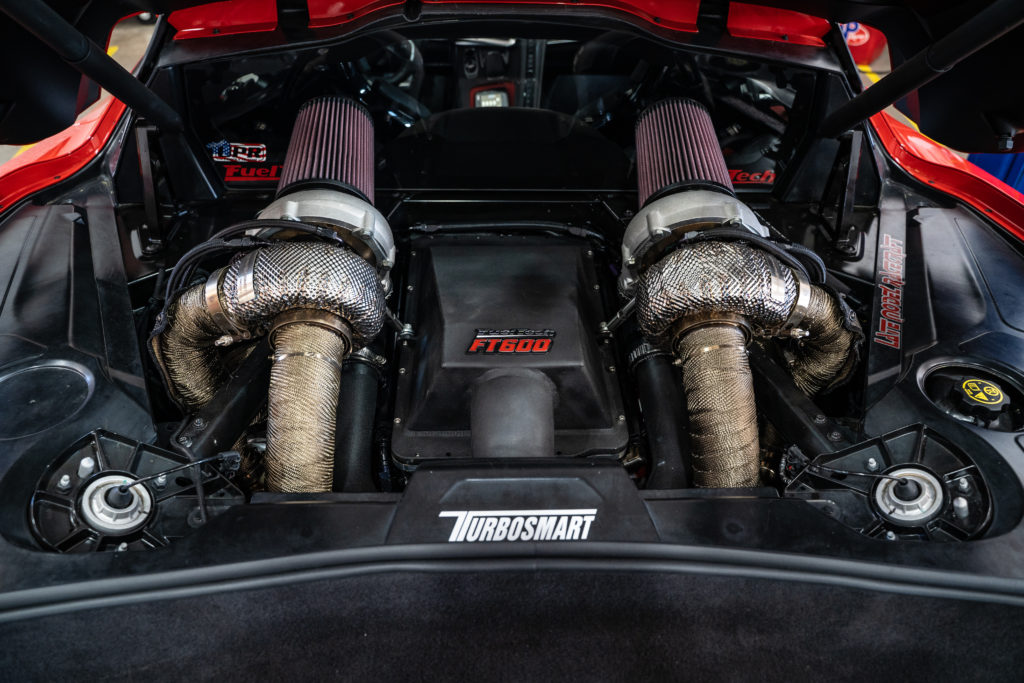 Since its release over a year ago, the C8 Corvette has become an icon of American muscle with supercar-like performance at a reasonable price. Dick and his FuelTech staff became enamored with the platform and were inspired by Late Model Racecraft (LMR) to develop a top-mount twin turbo combination. The aftermarket has yet to break into the factory ECU and offer custom tuning capabilities, but that wasn’t going to hold them back. The award-winning FT600 engine management system was integrated into the LT2 platform using a special jumper harness. The PowerFT ECU controls a supplemental fuel supply and other engine functions, enabling enthusiasts to add turbochargers and superchargers.

The FuelTech C8 Corvette employs two WB-O2 Nano sensors in the exhaust to monitor the air/fuel ratio through a Bosch LSU 4.2 sensor. Other sensors wired into the FT600 are a backpressure canister, 0-150 psi pressure sensor to monitor the port fuel injection, two backpressure sensors for each turbocharger as well as turbocharger speed sensors. The team also added two FuelTech EGT-4 kits, which allows individual cylinder EGT monitoring for all eight cylinders, aiding in complete data collection and engine safety.

The auxiliary fuel system feeds a set of eight 1700cc/min fuel injectors that are located in the custom intake manifold. A fuel cell is mounted in the front luggage compartment and uses an Aeromotive fuel system from the lines and fittings to its robust brushless 5 GPM spur gear electric fuel pump. The FT600 controls the fuel pump speed for around-town driving and ramps it up when the twin mirrored G35-900 Garrett turbochargers spool up and provide boost. The secondary fuel system runs VP Racing Fuels M1 methanol to serve as both additional fuel for the increase in power and act as alcohol injection to reduce inlet air temps and eliminate the need for an intercooler. The FuelTech O2 correction works in conjunction with the factory ECU to create the perfect air/fuel ratio under all conditions, keeping the engine safe in normal and spirited driving conditions.

The LMR-inspired top-mount turbo system uses Garrett mirror image G35-900 turbochargers, which are now set to 21 psi thanks to the new Dodson clutch combination. The FT600 boost controller plays a critical roll in manipulating the torque output in certain gears and rpm levels. All PowerFT ECUs include a boost controller option as standard equipment and the controller offers a series of strategies to suit a wide-variety of applications. A Turbosmart GenV HyperGate45 wastegate combines with FuelTech solenoids for the ultimate in boost control for this application. 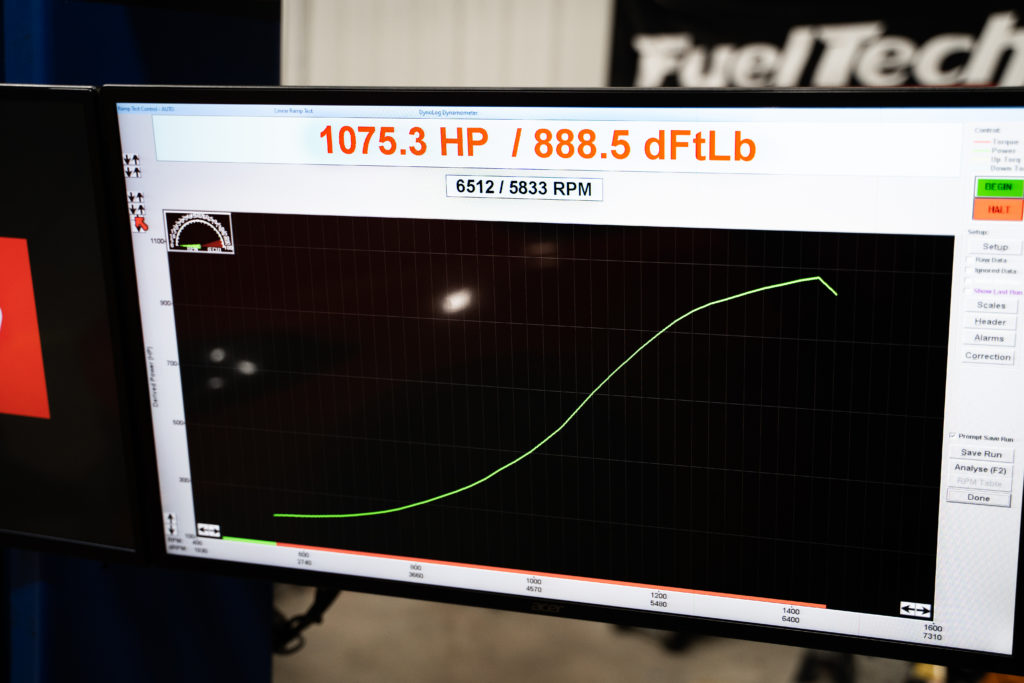 The LT2 engine has been upgraded to handle the increase in power with a drop-in kit by Gwatney Performance (GPI), which includes a set of Diamond forged pistons and robust connecting rods. A UPR Products oil separator helps keep oil out of the intake manifold, a common problem in boosted late-model vehicles. LMR provided the larger stainless steel exhaust to expel the spent gases.

From a 1,075 whp C8 Corvette to dominating motorsports around the world, that is the reason you’re seeing #FuelTechEverywhere