When engineering enthusiasm runs in the family

Garrett Mexico employee Moises Lojero’s 12-year-old daughter Monserrat has big ambitions. Even at her young age, she knows what she wants to be when she grows up – an engineer, just like her father and mother. And after earning a Bronze Medal in the 2019 Infomatrix Robotics International Championship in Bucharest, Romania – where more than 1,000 students from 46 countries competed across 10 robotics areas – Monserrat has already proved how the Garrett passion for engineering can truly run in the family! 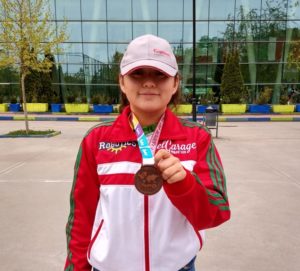 After winning second place in a robotics competition in Guadalajara, Monserrat traveled with two other students and their supervisor from their home in Mexicali, Mexico to compete in the “LEGO® Sumo” championship category of the 2019 Infomatrix Robotics International Championship in Bucharest.

The category required the students to build and program a small robot that can push the competing robot out of bounds. With more than 40 other teams entered in their category, Mexicali Robotics earned bronze medals for their overall performance.

When asked about how she felt upon returning home from her first trip to Europe with a medal, Monserrat said that one of the most fun aspects of mechanical engineering is trying to “create new things that no one can even ever imagine.”

She plans to continue furthering her engineering education while entering more competitions in the future so that she can fulfill her dream of helping people with a missing or impaired part of the body through prosthetic engineering.