Chris Boersma and his team compete in Time Attack events all over the U.S. and Canada. Time Attack is a unique form of motorsport that pits racers against the clock with a goal to set personal and track specific best lap times. Sanctioning bodies like Global Time Attack, Grid Life, Canadian Sport Compact Series host events all over the US and Canada. Track records are what drive competitors to push the limits with production-based vehicles the specifically tuned for this sport and its unique challenges. From series like  Time Attack competitors are always chasing more horsepower while trying to maintain reliability and a useable power-band. Boersma’s car of choice is a 1999 Honda Civic with a Garrett GTX3582R Gen II turbocharged 1.9L Honda B-Series Engine that cranks out 785 horsepower!

The smaller displacement has made the job of finding the right turbo for Time Attack a bit more difficult. They have been fortunate enough to test many different turbos in the Garrett lineup and recently they made the change from the GTX3076R Gen II to a GTX3582R Gen II.  Choosing a turbo for Time Attack can be very difficult, and this is something that the team has worked very hard on over the years. Time Attack is unique in that it has elements of Drag Racing mixed with Road Racing and power is always something teams want more of. As more aero is added to the cars, more horsepower is required to overcome the drag that it generates. The team had very good success with the GTX3076R Gen II which produced a very wide power band, but ultimately needed more power and made the choice to move to the larger GTX3582R Gen II turbo.

With the constant evolution of time attack the team had to make the choice at the end of the 2018 season as to what they would do with their turbo setup. The GTX3076R  Gen II had always provided a very wide power band and was allowing them to run 605whp on a .83 A/R divided housing. However, with other cars making well north of 700whp and with the team’s desire to constantly push the envelope the decision was made to move up to a GTX3582R Gen II turbo. With the change over the team decided it was time to improve on their previous manifold design and enlisted Unit2 Fabrications to build a custom twin scroll, equal length manifold. Many hours were spent optimizing the design of the manifold. The manifold utilizes the Garrett twin scroll merge collector and the end result is truly a work of art. 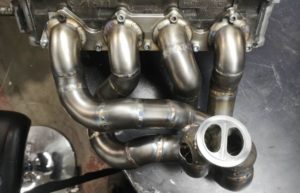 With the smaller turbocharged 1.9L Honda B-Series engine the decision was made early on to run a divided turbine which would help with spool and response above and beyond what the GTX Gen II already offered. The team was already running a twin-scroll manifold, but they decided to improve on the design with a more traditional top mount setup which would allow them to equalize the length of the runners.

With this design, the cooling system was leaned forward to accommodate things and the decision was made to run a single TiAL 44mm wastegate. The wastegate is fed from a merge collector that grabs exhaust from both cylinder pairings on the manifold. The 44mm wastegate dumps to air and the turbo utilizes a 3” downpipe.

On the charge side of things, the turbo feeds directly to a custom backdoor intercooler which utilizes a Garrett core. The short intercooler piping helps with response and also helps keep things clean and serviceable in the engine bay. 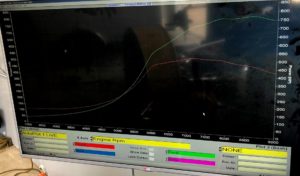 GTX3582R Gen II:  the car made 785WHP and 520 ft/lbs of torque. With the new setup the team sacrificed a small amount of spool compared to the GTX3076R but picked up a massive amount of top end power. Not bad for a turbocharged 1.9L Honda B-Series engine. Previously the car was struggling to keep power going past 8400RPM, but with the new setup the car was carrying power right to 9200 RPM. After testing on track the team were very happy with their choice to change over to the larger turbo. There was an impact to spool, but the time spent in those areas is minimal and the overall increase to mid and top-end power more than makes up the difference for those changes, even at lower speed tracks. 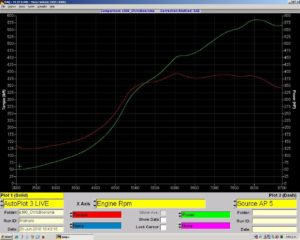 After testing on track the team were very happy with their choice to change over to the larger turbo. There was an impact to spool, but the time spent in those areas is minimal and the overall increase to mid and top-end power more than makes up the difference for those changes, even at lower speed tracks. 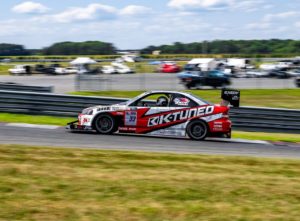 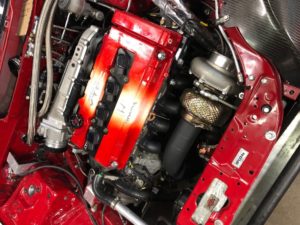 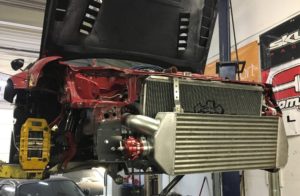 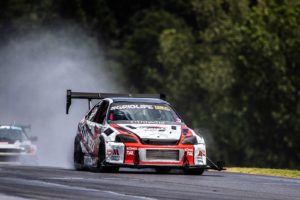