PowerMax performance products by Garrett Motion are vehicle specific turbo and intercooler upgrades for the most popular OEM turbocharged vehicles. These drop-in upgrades increase vehicle performance while conforming to the limited OEM space constraints. This PowerMax FMIC or front mount intercooler for the 2013 – 2018 Ford Focus ST is 115% larger than stock, more than doubling the air cooling capacity of the OEM core. The larger Garrett performance intercooler core reduces intake air temperatures by an average of 11 °F (6.1 °C) and increases the heat saturation point from 4 dyno pulls to 8 based on OBD II data from testing. This performance intercooler showed an increase of up to 25 HP (19 kW) and 9 lb-ft (12 N-m) of torque compared to OE during back to back dyno comparisons.  Testing was conducted in a wind tunnel that generates air velocity to match a vehicle operating at speed.

The paragraphs below contain excerpts from an article written in partnership with MotoIQ. For the full article click here

We like intercooler upgrades; they are a modification that gives you something for nothing.  Upgrading to a more effective intercooler will increase horsepower by improving intake air density and reducing thermal stress on the engine thru cooler intake air temperatures. Cooler temperatures results in a decrease in combustion temperature, moving the engine further from the edge of detonation under boost. As a result, water and oil temps can drop and that pressure drop across the core reduces the strain on the turbo’s compressor while reaching target boost pressure.

This means the turbine does not need to recover as much power from the exhaust stream to power the compressor. Less power recovery needed reduces back pressure resulting in less propensity for detonation, less heat retained in the engine as well as better volumetric efficiency. With cooler intake air temperatures and less back pressure, the engine’s tolerance for detonation increases.  This new higher tolerance utilize tuning to increase boost pressure, ignition timing, and perhaps a leaner air-fuel ratio to produce even more power. For a simple bolt-on upgrade, a performance intercooler has a cascade effect for making more power and efficiency while reducing stress on the engine; something we can all appreciate.

The Garrett intercooler design utilizes a bar and plate type core. Bar and plate type intercoolers have a large thermal mass by design, which enables them to quickly and efficiently soak up large amounts of heat. The core also has internal offset fins, which transfers heat externally to the plates that are cooled by ambient air flow. The charge air fins transfers heat from the charge air to the plates, and the ambient air fins transfers that heat from the plates while the ambient air cools the fins. The process repeats as long the car remains in motion or until the core gets heat soaked. 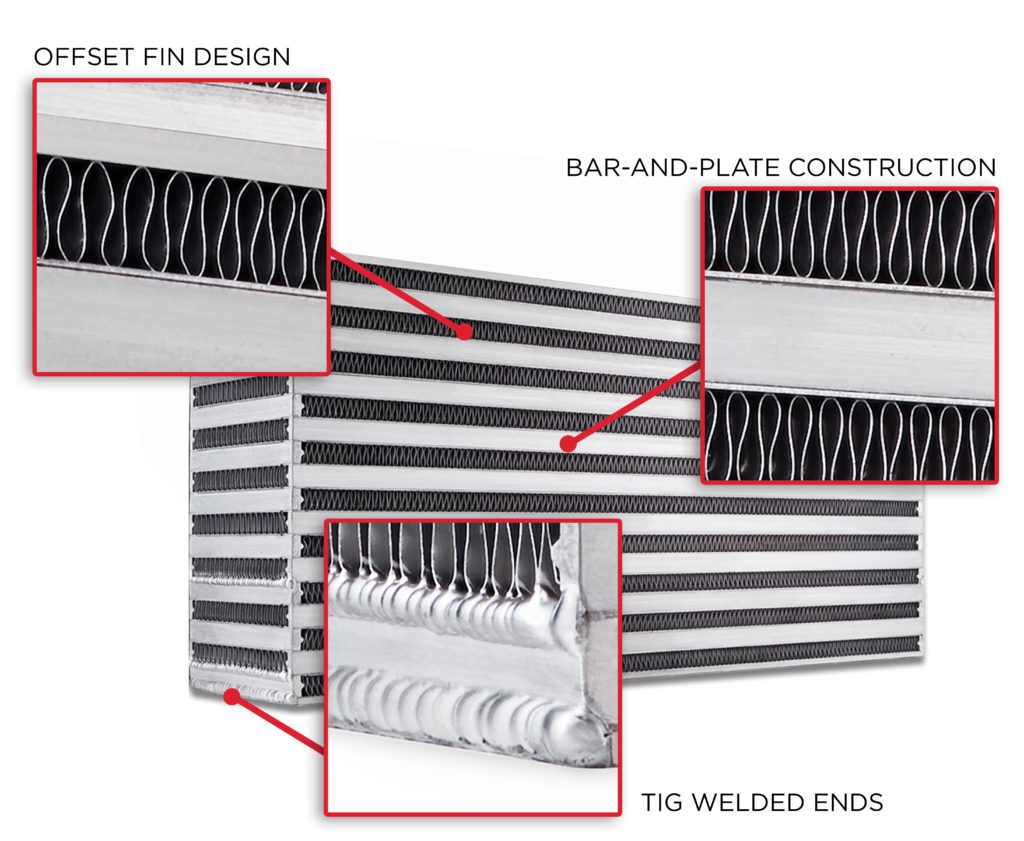 Testing the OEM Intercooler For Performance

We tested our Focus ST at World Motorsports wind tunnel dyno to get a baseline reading of the power and cooling efficiency from the OE intercooler.  Using the World Motorsports dyno is critical for accurate testing as the powerful fans simulate actual road airspeed. Our test car with the stock intercooler performed 12 back to back sequential pulls which results in the intercooler discharge temperature to saturate and stabilize.  Over the course of the dyno pulls the power output greatly fluctuated.  We believe the engine control strategy may be to hit the car with a lot of early boost and spike the torque at a very low RPM. This makes the engine highly likely to detonate direct injection or not.

To keep the engine from destroying itself, Ford has very active detonation detection and the ECU has a lot of control authority.  You can see this through the torque, which at lower rpm is all over the place.  The average torque over all runs was 259 lb/ft with a sizable standard deviation of 17.2 lb/ft of torque.  Since peak power is obtained at higher rpm when the cylinder pressure is more stable and the propensity for detonation is less, our average power was 177 whp with again a sizable standard deviation of 8.9 whp.  That is one active ECU.  The Focus ST is the least consistent car we have tested on the dyno to date. We threw the car back on the dyno with the Garrett intercooler and were very pleased with the results. We used the same methodology, completing back to back pulls until our intercooler outlet temperatures stabilized.  It took an additional 5 runs to do this due to the larger  and more efficient Garrett performance intercooler’s ability to absorb heat. Our average power reading over 18 runs was 203 whp and 277 lb/ft of torque. The result is an average improvement of 28 whp and 20 lb/ft of torque over the stock intercooler!  The standard deviation for torque and power was 5.2 lb/ft and 7.3 whp respectively.  This means that the run to run variance in torque was 330% better with the new intercooler.  The run to run power variance is a 12% improvement over stock.

The A to B comparison of two of the dyno runs to show a typical power and torque difference between the stock and the Garrett intercooler.  The numbers stated before are the average gains. As you can visually see here, the gains are huge and across the board, with a lot of area under the curve. With major power gains like this, the power increase is readily felt in the seat of the pants as soon as you step on the throttle.  The turbo spooled faster and the car had more easily felt power everywhere. Our conclusion is that the huge power gains that we saw were the result of a perfect storm, a very effective intercooler being run on an engine whose design and calibration depends on the use of an effective intercooler to begin with. We were pretty impressed that reducing the charge air temperature really made the car a lot more consistent. We think that the cooler charge air temperature makes the engine less on the edge of detonation so the ECU does not need to be as active.