The presence of Garrett® aftermarket brand at this year’s Indonesia International Auto Parts, Accessories and Equip Exhibition (INAPA) was top-notch and left a great impression, according to the hundreds of visitors and the show’s organizers.

The Garrett display was voted “The Most Favourite Booth” for its excellent showcase of turbocharger technologies, educational turbo infographics, and engaging videos. The signature red-on-white color scheme attracted not only the eye, but many visitors to the booth. Current and future customers, other exhibitors, and media stopped by to learn more about Garrett turbocharging, its benefits and how it stacks up against the competition. 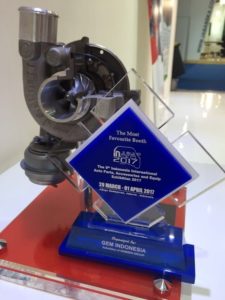 The display was constructed under the theme of “Garrett – Why Risk It?” The “Why Risk It?” slogan reaffirms the quality level of genuine Honeywell aftermarket turbos compared to copies – which has up to a 40% performance gap if a customer choses a knock-off turbo.

This was Garrett’s debut at INAPA, which is an annual gathering and marketplace for international manufacturers and suppliers to showcase their latest auto components, parts, equipment, tools, and technology to audiences from across Asia. The strong Garrett presence serves as an example of the willingness to support its aftermarket customers in the Indonesian market.