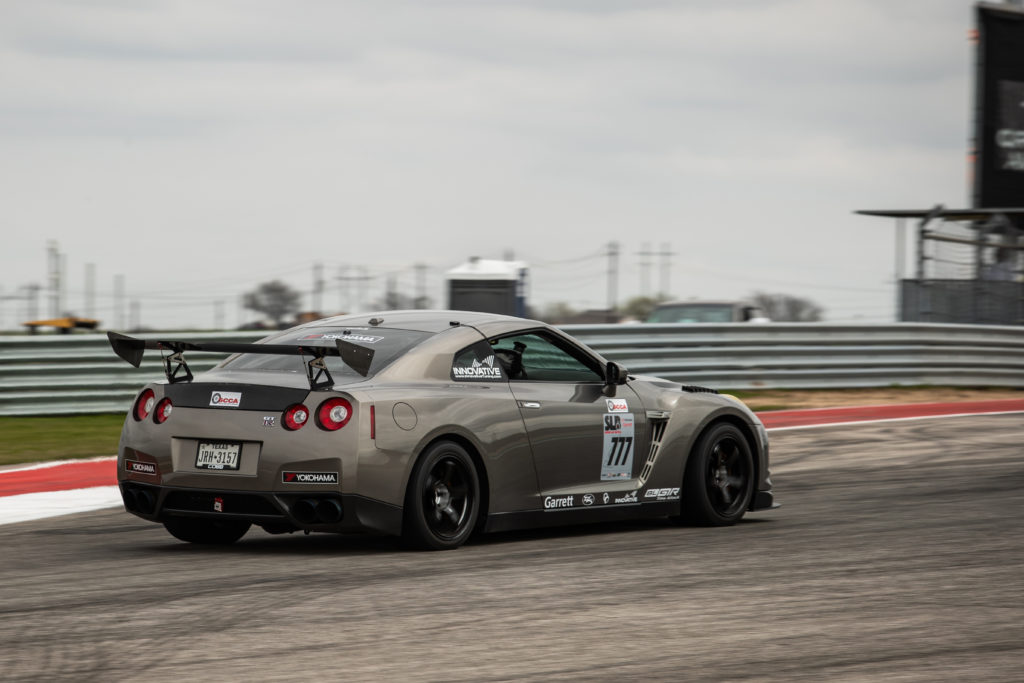 Is it possible to make big useable horsepower in a twin turbo configuration without sacrificing response and driveability? Is it possible to build and tune a car that can do it all, meaning awesome boost response out of the corners, big power on the top end, and can pick up the groceries in a bind without being hard to drive on the street? We think you’re going to like this 1170 horsepower twin turbo R35 Nissan GT-R using new Garrett G30-900 turbo chargers because it might just be that needle in the haystack. It belongs to Mike McGinnis from Innovative Tuning, one of the top ECU calibrators in the world and additionally the Senior R&D Calibrator at Cobb Tuning. McGinnis, a racing enthusiast and driving instructor has combined on-track knowledge and modern engine management to create thousands of tunes for enthusiasts around the world.

The following are excerpts from the “Tuning Boost For Drivable Power: Sometimes Less Is More” article published on Speed Academy. (click at any time to read the entire writeup) We do not include all the good tech info.

“Turning boost down to go faster may seem counterintuitive, but the fastest way around a track requires delivering the right amount of power at the right time.”

How much power can I make while retaining the margin of safety I can accept? Out of that power, how much can I use considering track conditions, tire size, tire compound, gearing and more? Once you have decided on a safe max power and peak torque, you start working backwards from there. Supercharger aficionados often tout the drivability of their forced induction preference, and that comes back to the traction benefit  of a flat or mildly increasing torque curve. Luckily for the turbocharged crowd, changing the shape of your torque curve is as easy as dialing in your boost curve. Modern engine management has changed turbo tuning forever, giving calibrators the ability to make turbos dance to their tune.

As Mcginnis rushed to get the GT-R ready for Super Lap Battle at Circuit of the Americas, he compared the Boostlogic stock location turbo kit with Garrett G30-900 to the stock baseline. The results were impressive with the Boostlogic setup outpacing the stock setup at 2500 RPM which is remarkable for something that produces 3x the power. The boost was tamed in the 4000-6000 RPM range for optimum performance in the technical sections while ramping up the boost for straightaways up to 8000 RPM. 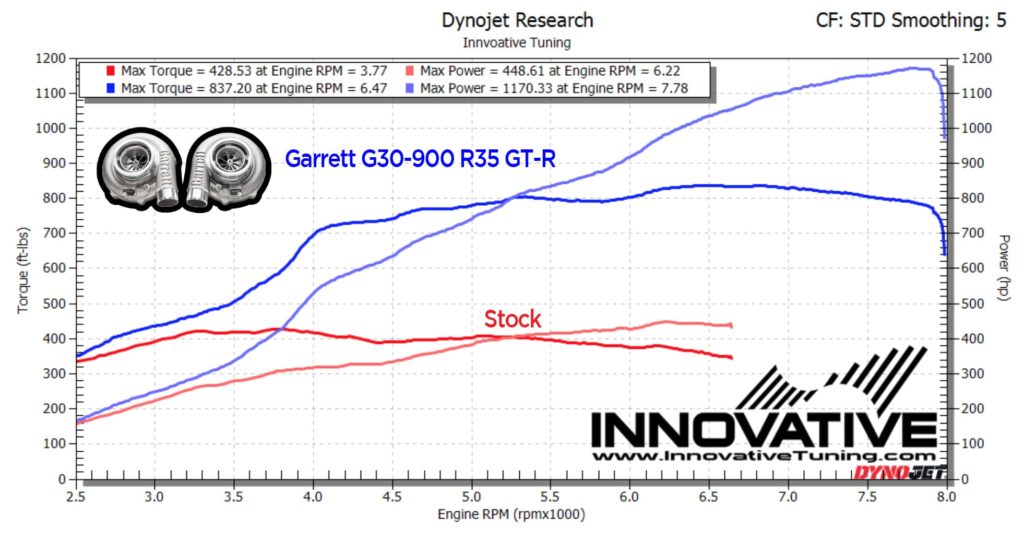 In the end Mike was able to dial in a smooth torque curve for the 1170 horsepower R35 GT-R providing low RPM torque and enough power to boost the car to 174 MPH on the straights. Looking at the graph you can see the blue lines (Garrett) are slightly higher than the red (Stock) from 2500-3500 RPM meaning at low RPM the larger G30-900 turbos provided better response than stock. From 3500-8000 RPM its night and day difference what the turbos are able to produce. As Mike said “The fastest way around the track requires delivering the right amount of power at the right time.”

People have been eager to hear how the new Garrett G30-900 turbos perform so I’m pleased to share some of the data I gathered during my first track outing with this new setup. One of the strongest features of these turbos is their responsive nature in transient conditions, and what better way to show that then on track. The sounds you hear tell the story pretty well on their own, but I’ve included some data to help better visualize turbo performance.

The turbos are installed in a BoostLogic stock location turbo kit (intakes, tubular exhaust manifolds, downpipes, etc.) In this video at bottom right you’ll find accelerator pedal position next to MGP (Manifold Gauge Pressure, commonly known as Boost) in PSI, and Aim which is the amount of boost I’m aiming for at that time, also in PSI. Of note, boost rises to meet the aim extremely quickly, making the car tons of fun to drive and very predictable.

Also shown are engine speed, vehicle speed, and turbo shaft speed. Shaft speed values get pretty high so I’ve shortened them up to fit. The longer number at the bottom of the gauge is actual speed divided by 10, so for example 12,000 is really 120,000 RPM. The numbers around the gauge are speed divided by 10,000, so 12 is 120,000, 7 is 70,000 and so on. The logger being used to record turbo speed doesn’t pick up low speeds so while speed appears to be 0 at times, the turbos actually never stop spinning while driving.

At top left I’ve shown the wastegate position in millimeters. The Nissan GTR is a twin turbo vehicle, but to avoid crowding the screen any further, I’m showing data from one of the two turbos. The greater the valve lift, the greater the wastegate flow, and the more exhaust energy is bypassed from the turbo to slow it down. As you can see, a little lift goes a long way. At top right you can see a reference for where I was on track at Circuit of the Americas. This video shows my medium boost setting which hit 174 MPH on the back straightaway. I turned boost up a bit after this video was taken, and there’s more I haven’t used yet. I’ve improved the engine calibration since the event, have some suspension improvements coming which I think will really pay dividends, and look forward to continued development of this car.

Big thank you to Mike McGinnis for taking the time to compile this data.
Thank you to Speed Academy for the support. Please click here for the full article because there’s so much more to learn that we did not include.